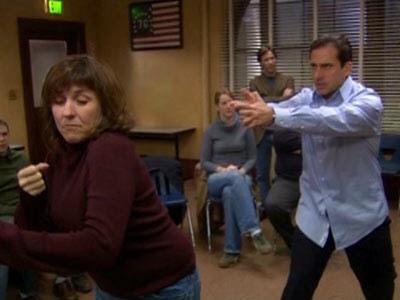 Recently I was watching an episode from The Office when Michael Scott is in improv class.  In every improv class, Michael Scott ALWAYS pulls out a “gun” and shoots everyone in the scene.  He says, “Think about this, what’s the most exciting thing that can happen on T.V. or movies or in real life?  Somebody has a gun.  That’s why I always start with a gun.”  It reminded me of a chapter of Tina Fey’s book Bossypants called Tina Fey’s Rules of Improvisation That Will Change Your Life and Reduce Belly Fat.  I would love to include the whole chapter, but I’ll just quote from a few parts.

The next rule is MAKE STATEMENTS. This is a positive way of saying “Don’t ask questions all the time.” If we’re in a scene and I say, “Who are you? Where are we? What are we doing here? What’s in that box?” I’m putting pressure on you to come up with all the answers…Make statements, with your actions and your voice. Instead of saying “Where are we?” make a statement like “Here we are in Spain, Dracula.”

Okay, “Here we are in Spain, Dracula” may seem like a terrible start to a scene, but this leads us to the best rule: THERE ARE NO MISTAKES, only opportunities.

As I scrolled through my Facebook and Instagram this week after the horrific school shooting in Florida there was an array of opinions displayed.  I have friends that could fall on most any part of the political spectrum, so I see an array of thoughts and opinions about a lot of different things.  Social media allows us to break the first rule of improv in so many ways.  We can lay out the article, or opinion, or “news” article that we think is correct and then we can walk away.  Like Michael Scott, we can take out our gun and shoot everyone in the scene and walk away.  It’s easy.  We can even go comment on other people’s versions of this and end the conversation immediately.

In our political world now, you mention gun control…BOOM! BOOM! BOOM!Mention, pro-choice or pro-life…BOOM! BOOM! BOOM!   Mention, welfare…BOOM! BOOM! BOOM!  The fear of the slippery slope has caused all of us when faced with a difficult conversation or topic to immediately shut down.  Christians can be the worst of all at this, but I would like to argue that if there’s anyone in scripture that was good at the rules of improv it’s Jesus.  Jesus never shuts down a conversation.  In fact, He usually asks some weird question after someone says something so that the conversation can keep going.  There are countless examples of this.

In Luke 18 we have the rich ruler.  This rich ruler asks Jesus after hearing him tell parables and talk about letting the children come to him, asks this question, “Good Teacher, what must I do to inherit eternal life?”  Jesus could have said, “Believe in me.” That’s it.  Conversation over. Mic dropped.  Walk away.  Instead Jesus prompts the conversation to keep going.  In John 4, the samaritan woman at the well, when the woman asks “How is it that you, a Jew, ask for a drink from me, a woman of Samaria?” Jesus could have said, “I was thirsty.” Walk away. Conversation over.  Instead, He engages.  He engages!!  He follows the rules of improv.  He makes the scene continue.

This past week we heard from a few of our missionaries how they have faced some serious spiritual warfare among a few members of their congregation.  Real, physical, demon possession kind of spiritual warfare.  Satan doesn’t have to get that involved with us in America.  He lives off of us, to use a heavy illustration, “gunning down one another,” on a daily basis through the ability to say anything on social media.  In our inability to have real, true, conversations with one another about the heavy issues that our country and our world is dealing with, we are not just killing thoughts and opinions, but killing real people behind the screen.

The rules of improv allow for so much more exciting things to happen!  Some of those things will be hard, difficult conversations.  There will be emotions that we didn’t know were there or why they are there.  There will be sadness, there will be anger, there will be frustrations.  But there will be so much more creativity, joy, laughter, and a better understanding of what it means to be created in the image of God when we keep talking.  We can take step one of improv: we don’t have to agree completely, but if we, as believers, believe that every person is an image bearer of the God of the universe, then we can agree on that. We can take step two of improv and can add to that conversation. We can take step three and be a part of the conversation, not just the one that expects others to do.  More than anything we can take step four and make opportunities to share the Gospel in the way that we care for one another!  So who wants to take an improv class with me?

christiansimprovpolitics
Previous What Happens When “I Love Me” Next So, Come Alive!

There are no upcoming events at this time.

In case you missed it, it was double win kind of M

We would love to have some CovPres representation

We know you’ve been dreaming about Wednesday nig

Don’t be a bag head and come to Wednesday night

We’re here and we ready for it. #winterreatreat2

Might be losers at basketball but bet we’re more

Girls and guys b-ball tonight! Both games at 9:00!

Meet tomorrow at the church at 10am to head to mos

TONIGHT junior High! Wear a Christmas sweater or i

Dessert after in the fellowship hall! No small gro